Reaching the Eternal – an interview with Aubert de Villaine

What three words would you choose to describe the wine of Romanée-Conti? If you’ve never had the opportunity to taste this iconic wine, expressions of chagrin such as ‘far too expensive’ or ‘not my league’ might come to mind. When I posed this question to Aubert de Villaine, longtime co-owner and co-director of Domaine de la Romanée-Conti, at the end of an hour-long interview in August, he seemed taken aback.

I nodded and waited. What descriptors would he come up with to capture the essence of the wine? Velvety? Elegant? Or something more precise, to express a specific aroma?

At last he replied: ‘Toucher l’éternel. You can touch the eternal. I listened recently to a quintet by Bruckner, an adagio, and you had the impression of reaching the eternal. With Romanée-Conti, if you taste very carefully and with time, you have this impression that you are not far from experiencing something eternal.’ 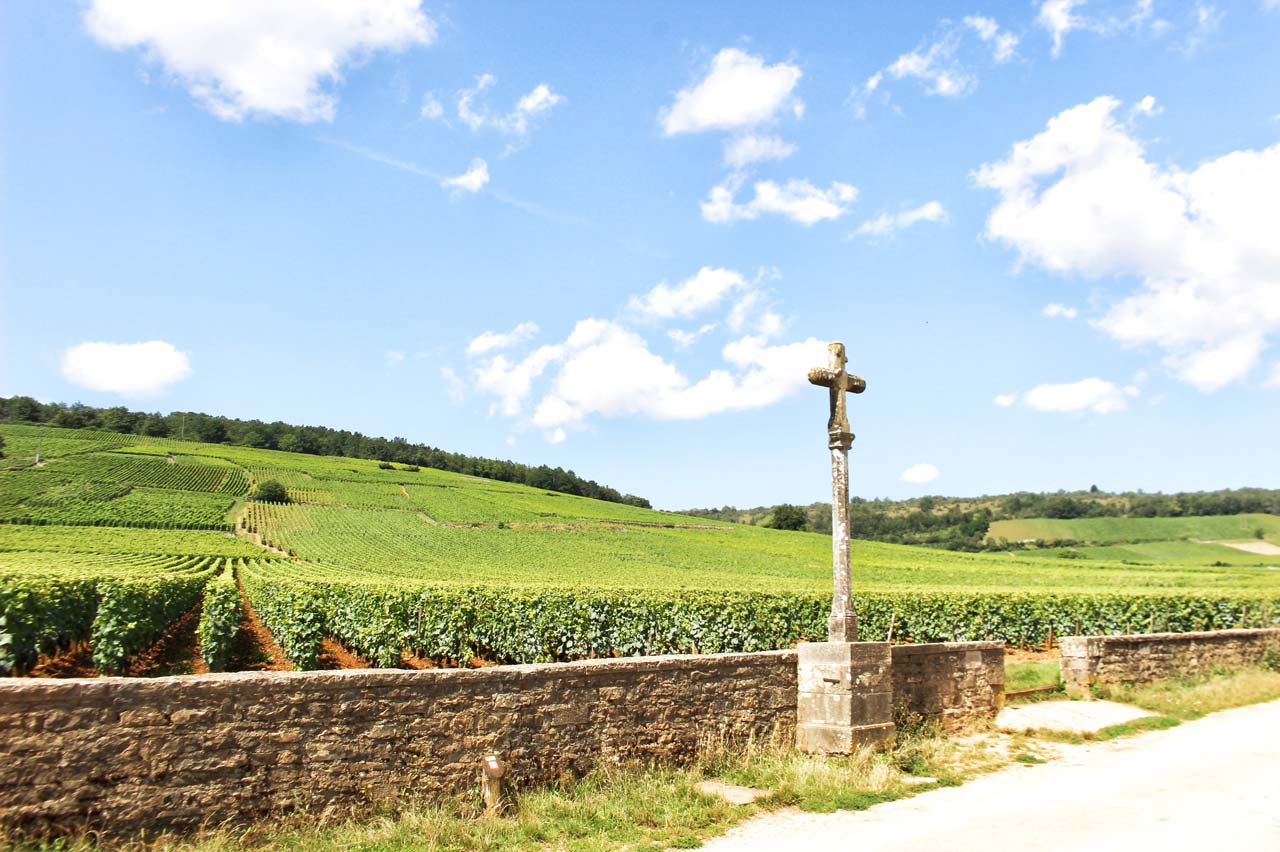 After 50 years at the helm of Domaine de la Romanée-Conti, Aubert de Villaine is preparing for retirement. By all accounts, he has made wines that soar to untold heights and linger in the memory longer than most. There has been much written on his adult life and accomplishments, so I decided to ask about his childhood in order to learn about the formation of his character.

The oldest of six children, Aubert was born in Rennes in August 1939, a month before his father went to war and was taken prisoner. Henri de Villaine spent the next four years in a stalag in Germany, before returning home in 1943.

‘I remember the day of his return,’ Aubert reflected. ‘He was really more of a man than a father because I had never known him. I had been told about him. Everyone was so happy that day when he arrived by train. I remember this very, very thin man in an old soldier’s uniform. They were kept in the same clothes for so long. It is funny because in my memory it is the happiest memory I can have, of those early days, but my mother told me that after my father had been back for two weeks I asked her, “maman, is this gentleman going to stay much longer?” I guess I was jealous. But I have no memory of this.’ 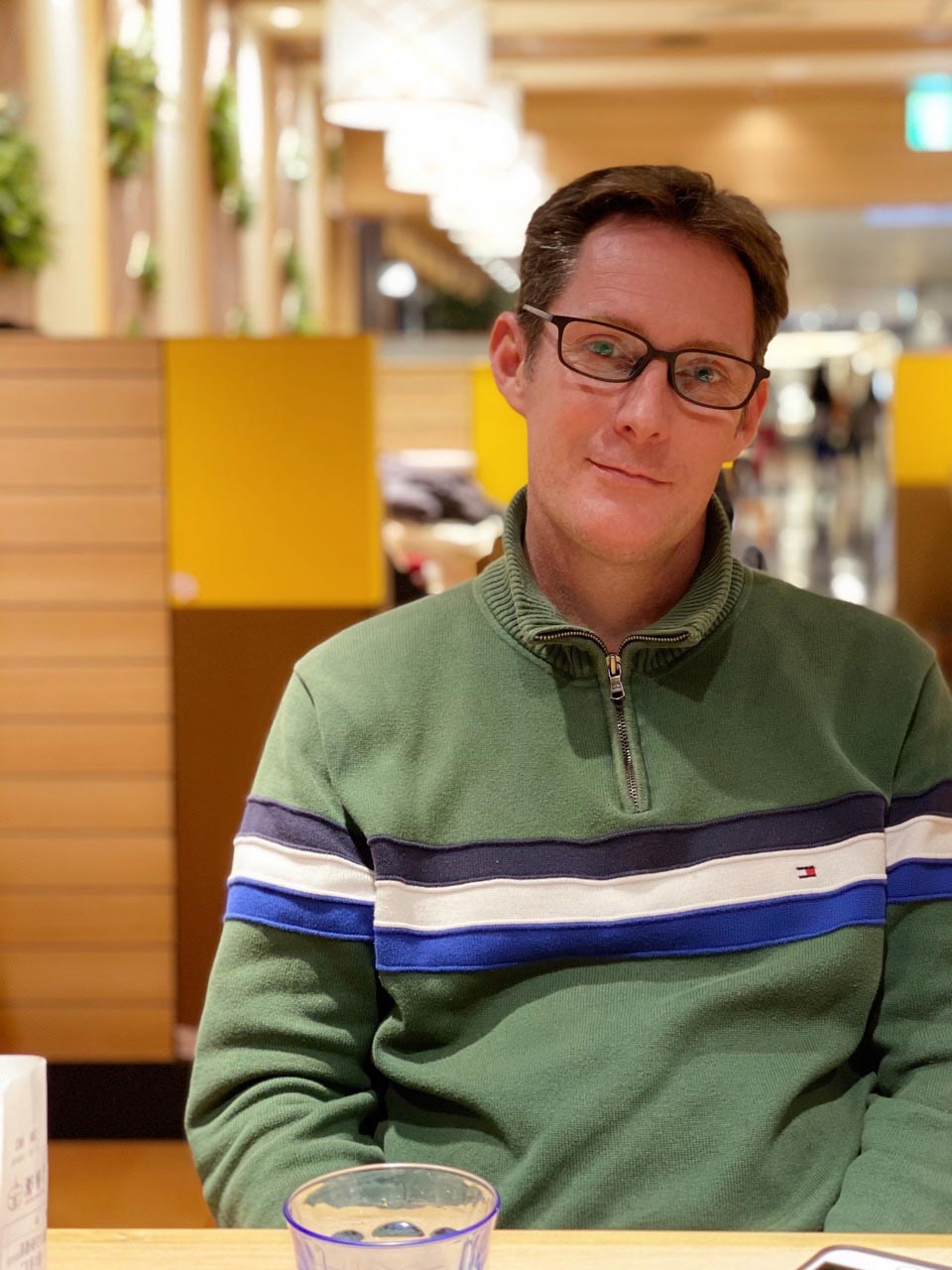 Andrew James is a professor of English literature at the School of Commerce at Meiji University in Tokyo, Japan. He is currently on sabbatical leave in France in order to write a book on Bandol wine. His great interest as a wine researcher is understanding the evolution of wine-speak, and the reflection of culture in wine language. 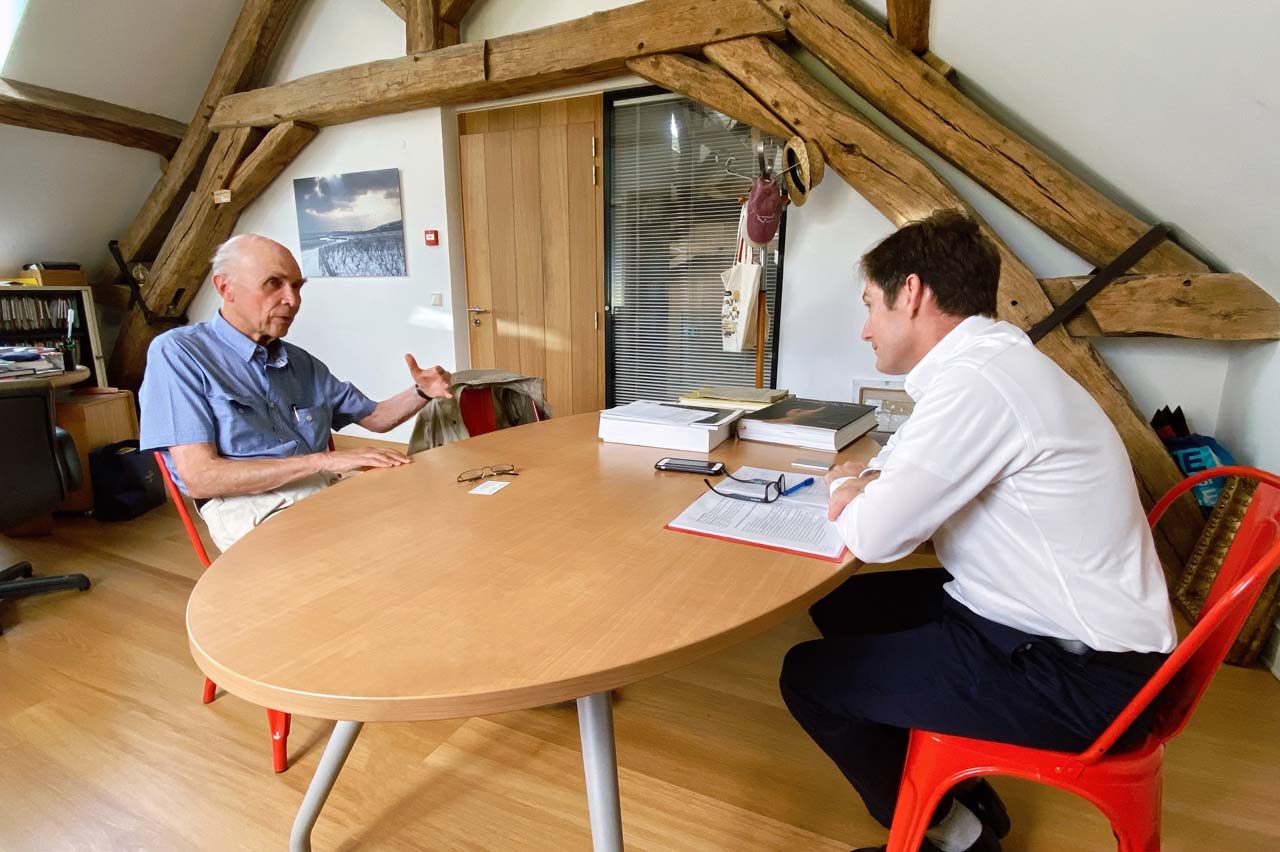 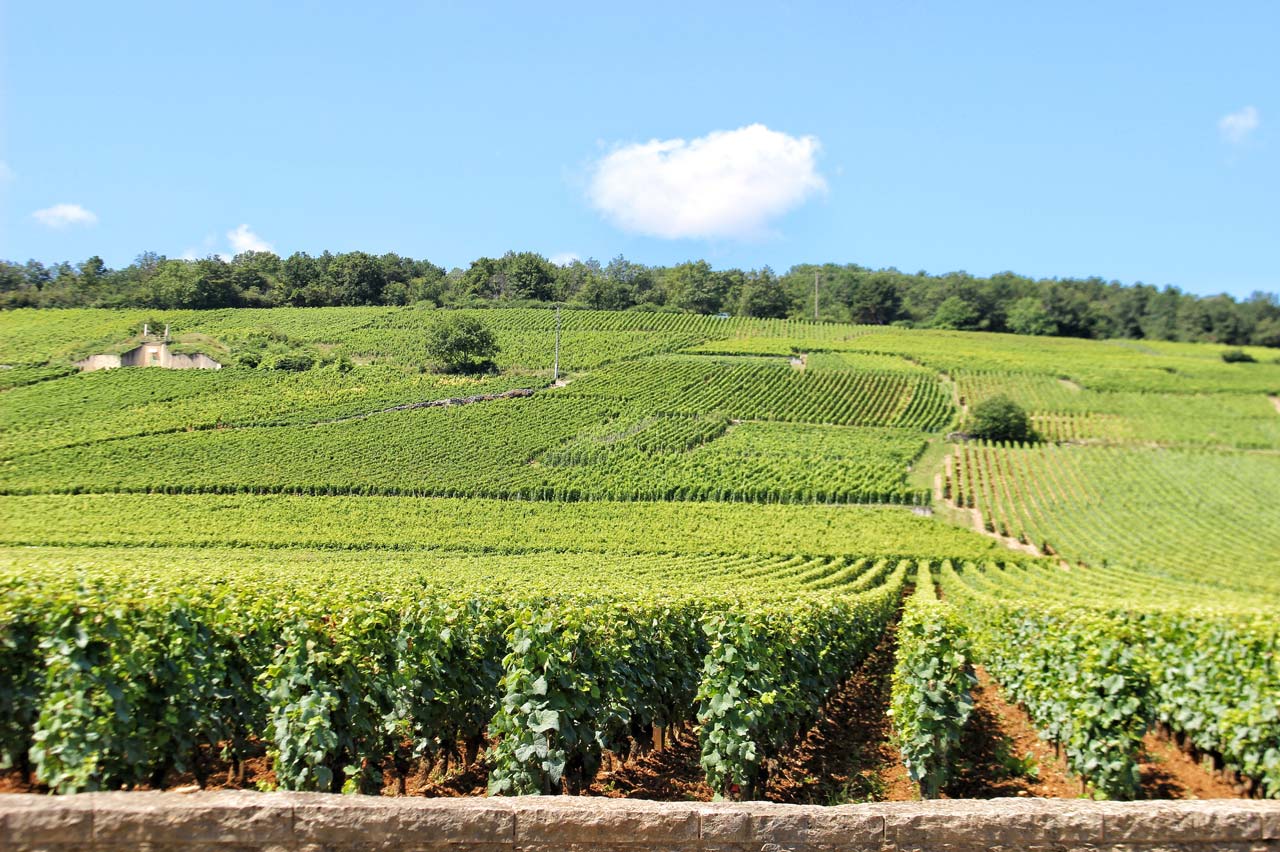 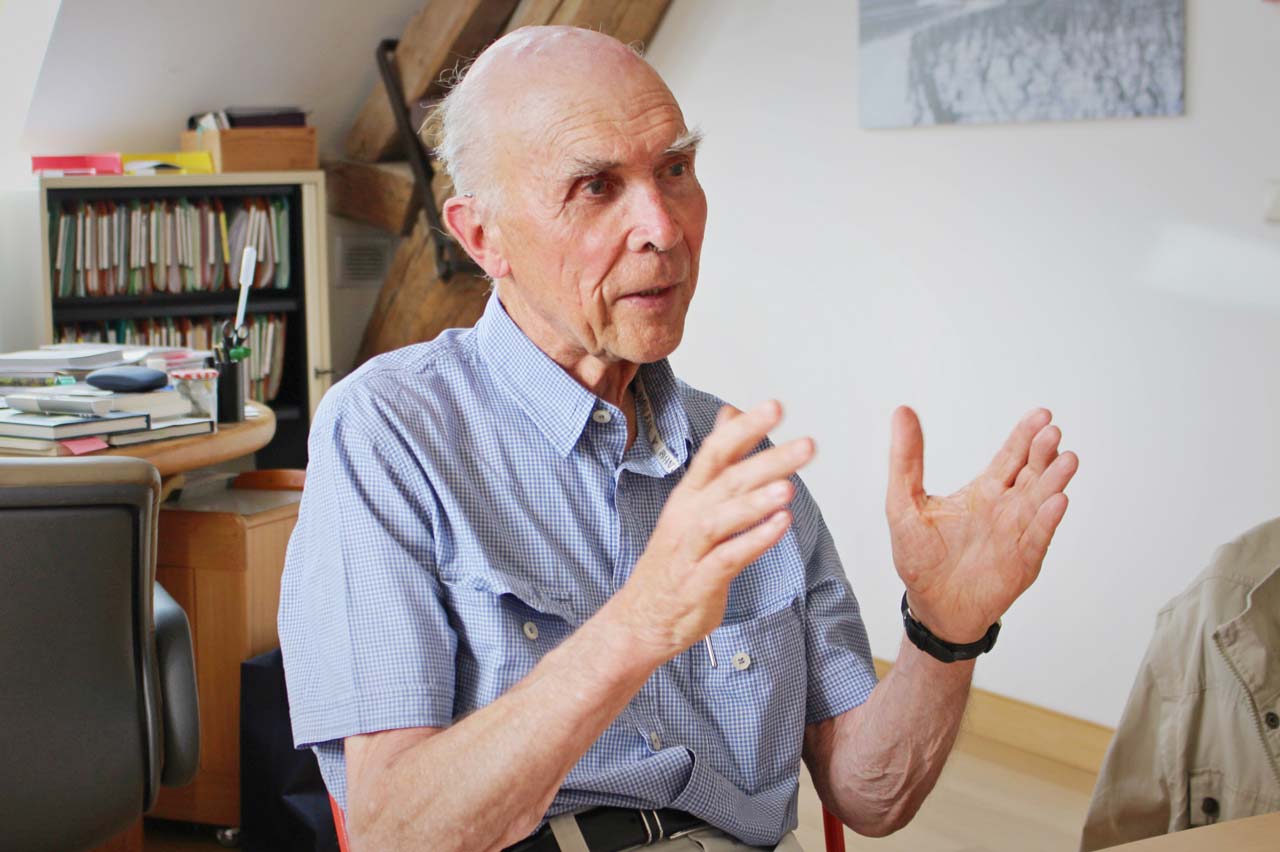 His father rarely spoke about his wartime experiences. ‘I think all the people who were prisoners like this were not proud of this time. I never met friends whose fathers had the same experience and said that their fathers were talking about it. But I remember he said that when they arrived at the camp after many days of walking in France and Germany the officer who was heading the camp told them: “Messieurs, there is one thing I have to tell you. Here the life of a man doesn’t count much.” But he survived, with many others.’

Aubert’s first wine memory is of a family dinner held when he was six or seven years old. He recalled hearing that they would drink ‘something very special, coming from a very special place, described as secret and to be admired’. It was the wine from the domaine. ‘My cousin and I couldn’t wait until the people were finished dinner so that we could finish some glasses that had been left.’

Does he remember how the leftover wine tasted?

‘I remember it gave us some pleasure. We were all excited, but nothing more than that. And I must say that until I was 24 or 25 wine was present in my life because of my family but I was not especially interested.’

He recalled summer visits to his maternal grandparents in Guildford, England, where they had lived since arriving as refugees from Russia in 1918, and he spoke glowingly of his parents.

‘My father worked a lot to feed his family and my mother was totally devoted to doing all of the work around six children. She had a little help, but not much, so they were really wonderful people.’

What traits does he think he has inherited from his parents?

‘This is for other people to say. It is difficult to speak about oneself. But I think – I hope – my father gave me his real humility. He was very proud of the domaine but he was really somebody with a basic humility and I think I share this. It is in my nature. From my mother,’ he smiled, ‘I think I got good health’.

This bodes well, since his mother lived to be 103. Aside from trouble with one eye that has been operated on four times and a recent hand injury that has hampered his ability to fly-fish, he looks the picture of health and strength, His erect posture, piercing gaze and steady, measured way of speaking make it easy to forget he is 82.

We spoke briefly of his time in California in the mid-1960s, when he wrote two articles on American wine for La Revue du Vin de France. ‘When I read them today,’ he sighed, ‘I feel quite ashamed’. However, he also met an enthusiastic Robert Mondavi who was dreaming of launching his own winery and it was in California that Aubert ‘developed the interest in wine that became very quickly a passion’. He then wrote to his father to ask permission to return to the domaine, which he received. His wife is American and he has been involved with a family wine project in Carneros, California, so I was keen to hear his views on culture.

What can the Americans and the French learn from each other?

‘The present French culture has been eaten by American culture,’ he replied without hesitation. ‘I say eaten, it’s a word and a pity because [French culture] was not strong enough to defend itself against the worst sides of that culture.’

And yet he is full of praise for American intellectualism: ‘There is an American elite that has found in French culture, books, wine, something that really attracts them and they have become sometimes better than the French. I am surprised when I look at books about French literature or philosophy that very often they are by Americans. And wine. I am sure there are many, many more wine lovers in America than you have in France today. We have been able to give this to Americans. Today, what we can give, I don’t know.’

His optimism returned when the focus of our discussion shifted to the current state of Burgundy. ‘I think that it is more alive than ever because of the interest of the rest of the world. The Burgundy I knew when I arrived in the 1970s is 100% different and better now. There has been extraordinary progress. Like a new civilization.’

Next, we turned to wine and I asked what he thought of the practice of judging wines on a 100-point scale. I have never liked this system, though if I were a winemaker and Robert Parker gave me two consecutive perfect scores (as he did to Romanée-Conti in 2015 and 2016), I might be able to see its merits.

‘I’m sure it’s not a good thing,’ he admitted, ‘but I don’t know how to replace it. If one wine is given 90, another 89, another 91, what is really the difference between the three? And you can see that the people who use these numbers work differently if they speak of a simple Bourgogne, for example, or a Grand Cru. A Bourgogne will never beat a Grand Cru. It shouldn’t be like this. A very good Bourgogne should get the same 95 as a Grand Cru. For me, I never look at these notes. But on the other hand, people need guidance. To know that this wine has been really appreciated by this critic whom they trust, his words are not enough. The words are mostly good. They are rarely bad. And the people need guidance. So it’s very difficult to get away from.’

But first impressions can be misleading and wines, like people, change over time, don’t they?

‘Yes, it is very difficult. For instance, some wines from our domaine from years like ’56 or ’75 were quite severe after bottling, even unpleasant after two or three years in the bottle. Twenty years later or more you open them and discover something extraordinary. Fading rose petals, this character that is so wonderful in old wine. In the nose but even in the mouth they become really round and the terroir starts speaking clearly. Of course, all of the critics at the time, in ’56, ’75, ’84, they condemned the wine. As for the 1980, it was unanimously condemned, when in fact they were from the beginning beautiful wines.’

How should wine be judged, then?

‘The critic has to be very cautious and take into account the origin of the wine. A great terroir will have more capacity over the years to develop something really interesting, much more so than inferior terroir. Also, any critic should have consummate experience of the wines he writes about. It’s only when you have the experience of La Tâche or Richebourg that you can compare the wine you taste with what is a Richebourg or a La Tâche. Even if there is no “true” Richebourg or no “true” La Tâche. It’s impossible: every year is different because the climatic conditions are never the same. Of course, we growers, all our lives we look for the essential one. The one that expresses the truth. You know at the same time that it is impossible. But, for a critic, it’s most important, through experience, to have a vision of the wine over a certain number of vintages, to judge the vintage you taste.’

Near the end of the interview, Aubert offered his three words – toucher l’ éternel – and an apology for not having any wine to share with me that day. He was alone at the domaine, as all of the staff members had taken their summer holidays and the cellar was closed. Indeed, Aubert himself let me in and out of the gate through which admiring oenotourists from around the world peer each day. I posed one last question. After all of the changes in climate, technology and vineyard practices over the last 50 years what does the wine of Romanée-Conti taste like today?

‘You have vintages that are very ripe and even if you are very careful not to get over-maturity you carry a certain weight from the heat of the vintage. The wines can in fact be drunk much earlier than we used to think. Until the 2000s the idea of drinking great wines in Burgundy was completely governed by the idea of four difficult vintages out of five. The idea was always to wait for 10 years, possibly even 15 or 20, because if you drink before you are going to lose the ripening of the wine in the bottle. This was true for all those difficult years. For the very ripe years they have the capacity of ageing but at the same time they have this sweetness and soft tannins. This gift to be drinkable very young. I believe myself that the wines we have from these vintages today can perhaps give more after three, four or five years, if they are well-made, than later.’